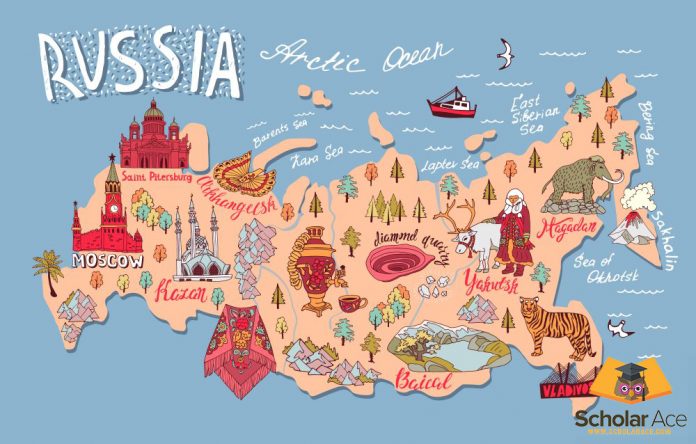 Russia has become a top choice as a study abroad destination for international students. This is owed to its interesting historical as well as political and geological position. It is not only the largest country in the world but it also contains over 9 time zones. More and more international students are coming to attend higher education in Russia for all kinds of studies be it art, history and literature or language studies along with STEM subjects as well.

Procuring a high quality education in a diverse environment is what makes studying abroad in Russia as an international student so exciting. The population of Russia is made up of over 160 different ethnic groups speaking more than 100 different languages. The official language of the country is Russia, which the majority of the population speaks, but other popular languages include Tatar and Ukrainian.

Students considering Russia for higher education are drawn to the culturally rich environment created by the incredibly diverse population of Russia. An important factor affecting this decision is the rapidly increasing tuition fees in Europe, this drives many international students, in the ballpark of at least 5000 per year, to attend universities in Russia.

Russia has always been a top proponent of quality education and this can be confirmed by the fact that the literacy rate in Russia is 98% which is higher than some places in Europe. Most of the best Russian are located in either Moscow, the biggest city in Russia or St. Petersburg and are well known as well as highly ranked on the worldwide university rankings. Moscow enjoys certain significance in the political and cultural and now even scientific and economic aspects along with being the seat of power for the government of Russia.

It is home to some of the UNESCO World Heritage sites along with 222 academic institutes including Lomonosov Moscow State University, the I.M. Sechenov First Moscow State Medical University and the Bauman Moscow State Technical University. Similarly, St. Petersburg is another big city in Russia and a popular choice for studying abroad in Russia as an international student, given its historical significance. You will find local folks calling the city “Piter” which has evolved as a sort of a nick-name for the city.

This city also houses some of the best academic institutes for undergraduate and graduate programs in Russia including Institute of International Economic Relations, Economics and Law, Saint Petersburg Polytechnic University and Herzen University.  These maintain their position as best universities for quality international education Russia by having a highly competitive entry process and education environment. These allow students to design their degree based on their own field of interest. These students will then be required to attend SPbPU as well as the partner university and in the end graduate from both simultaneously. Relevant and pertinent knowledge to your field of interest along with the practical technicalities that go with it can be learned through such degrees putting such international students at a par from other students.

EECA University Rankings of the year 2019 recognize many of the Russian universities in the top 10 with the Lomonov Moscow State University being number one on the list. Every time an international student chooses to study abroad they are not only surpassing their peers in the sense that experiencing a new culture and learning new languages all while immersing in the culture and lifestyle of the new locality puts them on par and mostly even ahead of their peers.

The same goes for international students who choose to study in Russia, and this is evident by many exciting alumni stories which encourage prospective students to choose Russia as their academic choice even more. Universities in Russia offer Russian language learning courses that are offered and operated via University Foundation Programs. These help prepare students for higher education in Russia as well as ease the transition into a new and different learning environment from back home. This is the only country where total language immersion is provided to international students.

An amazing opportunity for international students to grab if they are interested in studying arts as well. Russia is famous for its distinction in ballet, classical music as well as literature and painting. Having been home to some of the greatest authors to existing in the history of the world such as Fyodor Dostoyevsky and Leo Tolstoy, Anton Chekov, Vladimir Nabokov as well as Alexander Pushkin, Russia is well-known for its literature studies courses. Along with the literary brilliance, Russia also houses some of the musical geniuses such as Tchaikovsky, Rachmaninoff, and Stravinsky and students interested in music or dancing are attracted to explore these distinctions.

The famous Bolshoi Ballet is still operating and presents both classical as well as contemporary works of art to this day and age and international students looking to expand their horizons in this field can learn a lot. Similarly, if you are a history buff then Russia should be your top choice given its rich history and university degree programs in Russia that offer such degrees.

You can also learn  Countries Where International Students Can Earn Money While Studying Abroad and Enjoy your study. MAKING THE MOST OF YOUR STUDENT LIFE IN RUSSIA

Many students also prefer taking a gap year before jumping into higher education in order to explore the world and themselves, however this is not affordable for every student since putting your career plans on hold is not a possibility. This can be aided by studying abroad as well where you not only get to explore a new part of the world but also find out how you fit into it all and Russia can be a great place to do that as well. You can study side by side while exploring the Russian expanse.

Travelling and site seeing can be done while taking a break from your studies.Russia offers many exotic destinations as well as architecture to explore such as the Pushkin Palaces, Republic of Karelia known commonly as the ‘Land of thousand Lakes and continues to be one of the most sought after tourist spots in Russia. Students can visit Moscow and St. Petersburg as these are the most popular tourist destinations in Russia. Other great sites to visit are petroglyphs, Kizhi Island or Valaam monastery, Staraya Ladoga (an ancient village with a stone fortress), Shlisselburg’s island fortress of Oreshek, medieval castles of Vyborg, Pushkin, monasteries, monuments, churches and the museums of cities like Priozersk, Tikhvin, Ivangorod, Gatchina etcetera.

Seeing how seriously education is taken in Russia it would not come as a surprise that international students coming for undergraduate and graduate programs in Russia are given a lot of special benefits as well. With reduced tariffs on transport services as well as a 50% discount for suburban trains during the course of the academic year students can travel easily and save money as well.

This is not all, international student life in Russia is made further easier by providing them discounts on visiting museums and business and certain service providers as well. Students can enjoy reduced ticket prices at places like Pushkin museum, Kolomenskoye museum as well as Tretyakov Gallery and the Hermitage. In order to ensure your admission in study programs in Russia as international students looking for higher education in Russia, you must keep in continuous contact with your admission manager. Once your application is submitted you will be informed about the documents you need to submit. When you arrive in Russia you need to make sure all the documents you brought with you are notarized and translated in Russian. When they are received by the university, an admission manager will write an invitation letter.

This includes information about your home country and city of birth, city of residence, city where your visa is issued, full home address, as required by the Ministry of Internal Affairs of the Russian Federation. This may take about 1 month and a half to be completed. When you arrive at the university, your Certificate/Diploma and Transcript should be validated preemptively, that is your academic documents must be approved by the Ministry of Foreign Affairs in the country of your graduation, and, after that, by the Russian Consulate.

You are also required to confirm your arrival 2 weeks before your study program in Russia commences. Failure to do this can lead to the cancellation of your enrollment card. Once in Russia, you are required to go to the visa department of the university you are enrolled in. There you must submit your passport with visa, immigration card, contract (sent along with the invitation) for registration.

This must be done in the span of 3 days maximum since your arrival. You must apply to extend your Russian student visa one month before the expiry date. You must also hold on to the immigration card you are provided at the customs while entering Russia. This you must hold onto until your eventual departure from the country. Another thing to keep in mind is some Emergency contacts in case you need to contact the authorities.

If you are interested to get Best Scholarship Opportunities For International Students In Africa Than you have to read our post about that.